Romance novels devote a whole subgenre to them, but how common are relationships between white men and black women in day-to-day life? “Dating out” is something that currently is very much increasing in popularity, with celebrity marriages like Paula Patton and Robin Thicke in the tabloids, but it’s definitely worth knowing what the numbers say about where interracial couples sit in society.

According to US Census data from 2013, statistics showed that interracial marriages (that is, marriages involving white people and anyone who identified as a non-white race) made up 6.3% of all marriages in America. Black women made up 12% of those numbers.

The hard figures may seem small or even bleak, but we shouldn’t forget that it was only 49 years ago this June that interracial marriage was even made legal. It’s easy to feel like it was a long time ago, but almost any black woman in her thirties could ask her mother about growing up in a time where racial politics were so different that the idea of marrying a white man was not only uncommon but outright prohibited. Even after the law was passed, survey statistics revealed that only 29% of Americans in 1971 approved of interracial marriage (in 2013 that number had jumped to 87%). A great illustration of how those numbers translated into real life comes from a recent episode of the radio show This American Life. Saturday Night Live’s Sasheer Zamata spoke with her mother – a woman who grew up in Arkansas during the abolishment of segregation – about having to break up with a white man she was dating because her family forbid it. They were still very much aware of the racial prejudices in the country, and some of those prejudices are still alive and well today not only in America but across the globe.

See also  What Does Swirl Mean In African American Culture? 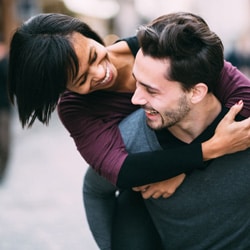 Something else that some black women feel strongly about in today’s society is the way some men fetishize them. This thinking does have a basis in reality, absolutely, but there’s definitely a lot of confusion about where the line is between preference and fetish. There’s certainly nothing wrong with having a preference: everyone has them, regardless of race, and for many – arguably most – Caucasian men, that’s all it is.

As with a lot of very charged issues like this, it can be tough to overcome the paranoia, but black women shouldn’t discount dating out based on the acts of a few (something we could all do with considering in regards to most situations, honestly). Testing the waters when you first meet someone is always a good idea, but white men with underhanded intentions towards black women are usually easy to spot before long.

While it’s true that the numbers are smaller when it comes to relationships between white men and black women – and there are some added societal pressures – in essence they really are the same as any other romantic relationship in the world. We are, at the core of it, all struggling to find someone who fits with our specific personalities and beliefs – it’s not a struggle that’s unique to any race. What’s most important is individual compatibility, so if white men are your preference or vice versa, that’s really the only thing that should matter at the end of the day.

So what are your experiences with dating white men? Have you faced any hardships in your relationships with someone outside of your race that you think reflect outdated or disingenuous views? Feel free to share your stories and opinions in the comments below, we’d love to learn about them.

See also  I Want To Move Out Of America, Should I? And Where Should I Go?